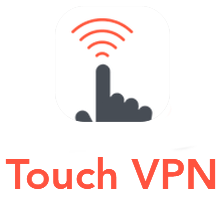 TouchVPN became available in 2014, where shortly after, in 2015, the rights to the application were purchased by Anchor Free. Currently, TouchVPN is headed out of California, USA. Additionally, the service does not store information about you, your computer, or your IP address.

At a macro level, the service specialties in changing and masking IP addresses, although for state-of-the-art protection and bypassing capabilities, you’ll desire a different service. For instance, you won’t be able to watch movies on HBO Go or Amazon HD while being unable to download files via torrent.

The official website does not say what protocol the client is running on. We assume it works on Catapult Hydra and PPTP. Catapult Hydra - Anchor Free development. The protocol increases the speed of the VPN connection and improves its stability.

A 128-bit SSL protocol is used to encrypt traffic.

Download Touch VPN from the official website with a monthly subscription starting at $12.99. TouchVPN is only suitable for mobile applications and must be downloaded from the Google PlayStore and AppStore. We recommend using the free version of touchvpn first, without subscribing, because there is no money-back guarantee.

There are programs for Windows and Mac and extensions for Google Chrome and Mozilla Firefox on the official site.

There are 5,900 servers in 90 countries available for connection. Most of the servers are virtual., meaning that they are also easier to hack and disable. We recommend using NordVPN. It has 5,700 servers, but most are physical and far less prone to risk.

The browser extension has only seven servers for connection. They are frequently overloaded and unstable.

For starters, TouchVPN does not flex special features, like a kill switch or split traffic tunneling. For a more comparative oversight, compare TouchVPN with ExpressVPN below.

Touch VPN will not solve serious problems on the Internet. It will only help you change and mask your IP address. If you need complete protection, choose an alternative service.