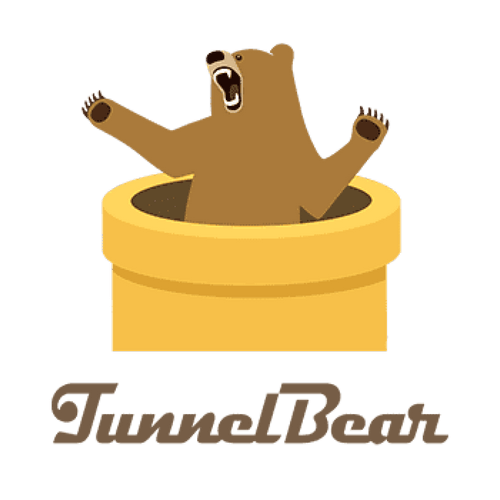 TunnelBear VPN was registered in 2011 in Canada and is owned by antivirus company McAfee, a division of Intel Security, so security and privacy are guaranteed. It offers 23+ countries to connect, apps for all platforms, leak protection, and stealth mode. Torrents at prolonged speeds make Netflix connection almost impossible.

The free version of TunnelBear has only 500 MB of traffic per month.

TunnelBear is headquartered in Canada, a country that is part of the Five Eyes. When requested from the government, the company will legally share a user's data like email address and the credit card holder's name.

In the free version, one device is connected, with the “Unlimited” tariff, the number of devices increases to 5. Each member of the “Team” package can connect up to 5 devices.

While it can’t provide access to Netflix or oper the door to worldwide internet from China, TunnelBear guarantees complete traffic masking. Primarily, this concerns the absence of leaks of IP and DNS addresses.

After downloading TunnelBear, the user connects to a free tariff with 500 MB of traffic for a month and can get 1-2 GB for reposting or liking entries from developers on social networks.

Those needing a VPN for personal use should consider the "Unlimited" package for 1 month, 1-Year, or 3-Years. There is a “Team” tariff for business, although the cost depends on the number of connected people. There is no money-back guarantee available.

Split tunneling is only available on the mobile version of the Android VPN client.

Officially, there is no support for P2P networks (no announcements yet), but file sharing via torrent is available.

Communication with technical support takes place through email after filling out an application on the official website. The reply time depends on the type of malfunction and the tariff (premium packages owners receive priority).

The business package comes with a dedicated account manager that drastically speeds up problem resolution.

TunnelBear has developed a VPN client version for Windows, Mac, Linux, Android, and iOS. The installation file is available as a download from the official website of the service or app stores.

Currently, there are no hacked or modified versions of the service.

Compatible with macOS Sierra 10.12 or higher. Automatic connection to the fastest servers with one-click of the mouse.

Gain access to music streaming platforms or watch YouTube. Overall, picture quality depends on the distance from the server and the selected encryption protocol.

Bypass geo-restricted online casinos with a built-in ad and malware blocker that prevents spyware from infecting your devices.

The extension is compatible with Google Chrome starting from version 22.0. Safeguard personal information from leaks via WebRTC.

While there is no access to Netflix, the service automatically detects the platform's IP addresses and blocks them, preventing them from watching movies, TV series, and shows.

Does not support TV boxes from any manufacturer. This applies to Apple, Amazon, and Android models.

Connect via GhostBear to activate Obfsproxy technology, which encrypts real information transmitted through the client. It slows down the connection speed, but the ISP will not be able to detect VPN usage.

There is no access to the World Wide Web, and the connection may be unstable (only works in Hong Kong).

Headquartered in Turkey since 2014 (after the introduction of restrictions on access to Facebook and YouTube). It is recommended to connect using GhostBear in the client settings.

Some of the servers are located in Great Britain and are available for connection from other countries.

Officially, the service does not support P2P networks and opposes the spread of intellectual property. Despite this, since 2020, the provider's servers have become available for working with torrents.

A limited number of countries does not guarantee access to worldwide sports broadcasts. Also, latency and buffering may occur when watching live TV.

Available without time limits but with limited traffic. To gain more GB by visiting official pages on social networks and liking or sharing a post from the developers.

The client is compatible with iPhone/iPad running iOS 11.0 or higher. The interface is available in English, Russian, Chinese, and other languages.

It does not collect information about the sites visited by users, IP addresses used, or DNS queries. When contacting the authorities, they will only provide the email address and credit card holder’s name.

Compatible with Android 5.0 Lollipop and above. Only in this version did the developers implement split tunneling and unique technology for encrypting SNI traffic.

The basic plan is free initially and offers 500 MB of traffic per month. You will be able to use the Free-tariff after registration on the official website and authorization in the selected client.

A separate plug-in for Firefox version 58.0 and higher has been implemented and is available for download from the official browser extension store.

There is a separate extension. Use the service on macOS to hide all traffic originating from your PC or laptop.

There is no separate extension available, but the developers suggest trying TunnelBear for Opera version 43.0 and newer as an analog.

Supports manual connection setup in Linux and Ubuntu version 18.04.x ​​called Bionic. Connection parameters are available on the official website of the provider.

There is no official support.

Cannot be configured on routers.

There are servers in Germany with access to all geo-blocked sites.

Access the network without the charming GhostBear connection. Minimal speed drops when connecting to nearby servers.

Free has a limited traffic package, but an unlimited ($3.33/month) or business plan ($5.75/month) has more perks. Not all subscriptions have a money-back guarantee.